Difference between revisions of "Chapters" 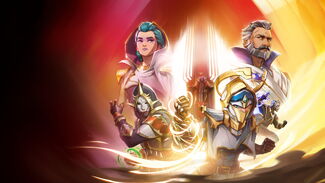 As the story progresses each week, new Story Quests will be made available temporarily that week. Chapters last 12 weeks.

Be ready for a less theoretical assignment next week. I need your help investigating a rumor.

Blackthorn: Rumor has it that the Order of the Vowbreakers caused the Fracture. I’ve been assured it’s a bald-faced lie, but I have reason to believe your order. The general populace does not.

The rumor’s been spreading across Longwatch like spiritfire, and no one knows the source of it all. Not yet, anyway. My informants have been looking into this for me, and I need you to collect what they gathered. Oh, and be a dear and pay them too. Information doesn’t come free, after all.

Blackthorn: No great revelation here. The Vowkeepers are the ones spreading this rumor, most likely to further discredit the Order. Blame the Fracture on those damned mages and all that.

But the level of detail this rumour has is… strange. There’s several reports of a magical artifact called the Vital Stone of Gyle. Never heard of it myself, but I’d like to learn more.

I’ll come up with a plan to get further intel. Until then, you keep doing whatever it is Breakers do.

Week 4: Get Their Attention

Blackthorn: The Vowkeepers have more information on the Fracture than they’re letting on. The rumour they spread proves that. We need to know what they know. And that means infiltrating their organization.

What the Keepers need now, more than ever, is strength. And while they may hate you Breakers, they’re not above converting the occasional criminal. Plenty of Vowguard soldiers actually started as Breakers, believe it or not.

But first, you need to prove yourself worthy of their ranks. I have a few ideas in mind.

Blackthorn: You make betraying your order look a little too easy. Makes me want to keep an eye out.

Next, I’ll arrange for a meeting between you and the Vowkeepers. Don’t worry about smooth talking them—there’s nothing a Keeper loves more than the sound of their own voice. Just follow their orders until you find out more about the Fracture and this Vital Stone of Gyle.

It’s likely you’ll be asked to act against us. Do it. The Order knows about your assignment and you have their full support. Whatever you’re asked to do, do without hesitation. Save for slicing my throat.

One last word of advice; do not botch this operation. That’s all.

Ferec Snowlash: What are the Vowkeepers to you, Breaker? The shadows that you jump from? The chains grabbing tightly to your wrists? We are so much more. We are your end. And your beginning.

Join us and know your true power. Wield magic for our just cause and turn yourself away from sin.

I shall grant you the opportunity to prove your loyalty. The kingdoms, in their wisdom, have sought our aid with a number of tasks. Perform admirably, and your place among us will be secured.

Ferec Snowlash: I see now that you were worthy of our attention. The kingdoms will be pleased.

I want you to forget your past life. The bonds you forged, the allies you made. They’re worthless to you now, here in these Hollow Lands. Give your loyalty to us, and you shall be made anew. Henceforth, you shall no longer bear the title Breaker. I now name you emissary of the Vow Mandate.

You shall report to me for your weekly assignments. Until then.