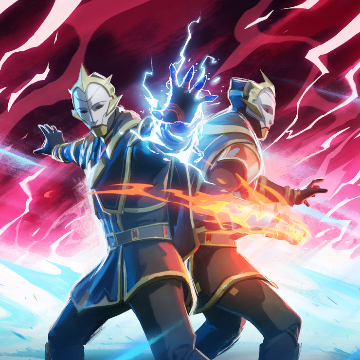 In BR, players can queue as either

In duo & squad queues, a match only truly ends for a squad once all their members have been exiled.
Upon taking lethal damage, they will first be disrupted into a wisp for up to 60 seconds before being exiled.
Disrupted players are immune to damage, but their actions are limited to slow movement alone.
In this state they may be

exiled by an opponent early, or

Players may still be resurrected post-exile by their remainding squadmates, once they enter a new safe zone.
Allies resurrected this way drop into the Hollow Lands anew with full health, but with no Consumables or Equipment besides their Class Gauntlet. They may also miss out on potential level ups from new safe zones.

Dominion is an objective-based 5v5 game mode, where teams fight to earn points by capturing zones and exiling each other until a score threshold is met.
The match takes place in one of five randomly chosen maps: Banehelm, Dustpool, Halcyon, Hymnwood and Bogmore.

The maps share the same regions of the Hollow Lands you would find in BR, but are encircled by a red Spellstorm that instantly exiles players.

Within each map there are three distinct zones to capture: the Moon Zone, Sun Zone, and Star Zone.
To capture a zone the player simply has to stand inside it for 10 s. The capturing process accelerates if multiple teammates are present, but will be paused if contested by a nearby enemy player.

The score threshold is equal to 75 + (15 * number of players per team).
So for a full team of 5 players the threshold will be 150.
If the score hasn’t been reached after 15 minutes, the team with the highest score wins.
Teams will passively earn 1 point every 10 seconds for each zone under their control. Exiling an enemy player grants points equal to the number of zones controlled, but always a minimum of 1 point.