Edit
watch 01:54
Obi-Wan Finale - The Loop
Do you like this video?
Play Sound

One of the core aspects of combat in Spellbreak is the ability to cast Spells & Sorceries.

Gauntlets of different elements may be equipped in both the right (primary) and left (secondary) hand respectively.
The Gauntlets' imbued elements dictate which Spells & Sorceries the player has access to.

Players start the match with a Common Gauntlet in their primary hand, whose element will correspond to their Class.
This primary Gauntlet can only be upgraded in rarity, unlike the offhand one which may be swapped out freely.
Without a Gauntlet equipped, they can only fire a weak arcane spell which deals 10 damage.

Elements combine with each other in various unique ways, for more info see Elemental Interactions.

There are a number of mechanics tied to specific Gauntlets and their corresponding Classes, but this section will only cover the universal ones.

Gauntlets along with other equipment is dispersed across the Hollow Lands in BR, or looted from Vowguards / The Merchant in Dominion.
However, higher rarity loot is only found at Elemental Shrines or in

Chests, with Legendary rarity being limited to

Gauntlets may be empowered with a 30 s Spell Damage & Sorcery Cooldown buff by activating Brilstones.
Stat modifiers like these stack additively with other buffs. (Ie. Base * Total Modifier %)

Players start out with a base max mana of 50 / 70 (BR / Dominion), which may be increased through Amulets or Mana Blessings.
This will limit the amount of Spells cast in quick succession. They also cannot cast Spells while levitating.
Once a player has depleted all their mana, they are locked out from casting Spells and levitating until they fully recharge it over 1 second. But they're free to perform other actions, such as using Runes, Sorceries or Dodging.
Levitating adds a 1.5s delay to the mana recharge, but only while in the air.

Aiming a Sorcery or

Ice Lance while airborne will cause a player to hover, greatly reducing the effect of gravity. May be cancelled with a Spell-input.

Projectiles can collide with both opponents and squadmates alike.
However, only damage and Crowd Control the caster is capable of self-inflicting, can afflict their squadmates.

Spellbreak's crosshair is attached to a third person camera that's separate from the character firing the spells.
The legacy camera is slightly to the right of the character, which causes a discrepancy between their positions.
When aiming at far away targets, this doesn't impact the player's aiming experience much compared to a traditional FPS. But when aiming at nearby targets, players may feel their shots straying off to the right.
Chapter 3's new centered camera largely avoids the above mentioned issue.

"Expand" button in the top left to see the full table, and mouseover keywords to read their effects. 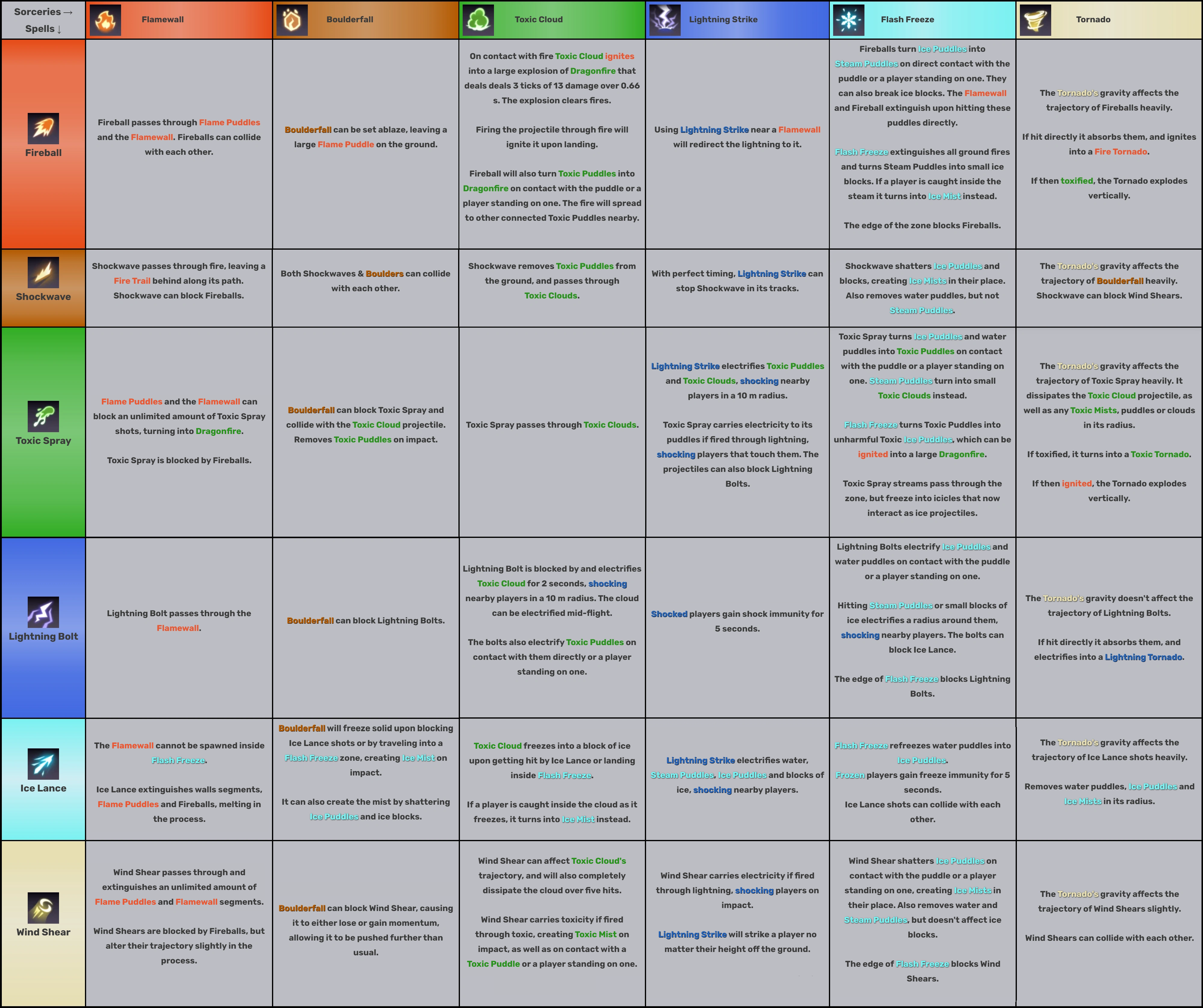