Difference between revisions of "Spells & Sorceries" 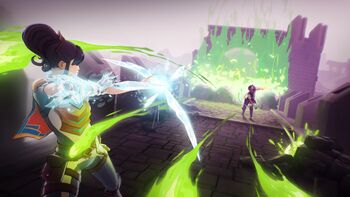 One of the core aspects of combat in Spellbreak is the ability to cast Spells & Sorceries.

Gauntlets of different elements may be equipped in both the left (primary) and right (secondary) hand respectively.

The Gauntlets' imbued elements dictate which Spells & Sorceries the player has access to.

Without a Gauntlet equipped, they can only fire a weak arcane spell which deals 10 damage.

Players start the match with a Common Gauntlet in their primary hand, whose element will correspond to their chosen Class.

This primary Gauntlet can only be upgraded in rarity, unlike the offhand one which may be swapped out freely.

There are a number of mechanics tied to specific Gauntlets and their corresponding Classes, but this section will only cover the universal ones.

Gauntlets along with other equipment are found throughout the Hollow Lands.

However, higher rarity loot is only found in

Chests, with Legendary rarity being limited to

Players start out with a base max mana of 50, which may be increased by equipping an Amulet.

This will limit the amount of Spells they can cast in quick succession. They also cannot cast Spells while levitating.

Once a player has depleted all their mana, they are locked out from casting Spells and levitating until they fully recharge it over 1 second.

However, they're free to perform actions which don't require mana, such as using Runes or casting Sorceries.

Aiming a Sorcery or

Ice Lance while airborne will cause a player to hover, greatly reducing the effect of gravity. May be cancelled with a Spell-input.

Casting Spells while airborne prevents acceleration and applies a small amount of friction.

Each Gauntlet's main Spell has a different cast time and recovery time, both collectively referred to as Cast Speed. This was increased substaintially in Chapter 2.

Cast time denotes the duration of the cast animation, whilst recovery time denotes when they can begin casting another spell or mana recharging after firing.

Some gauntlets also have a mana recharging delay that is added on top of their recovery time.

Lightning Gauntlet each have an additional mana recharging delay of 0.5 s & 0.57 s respectively.

Projectiles can collide with both opponents and squadmates alike.

However, only damage and Status Effects the caster is capable of self-inflicting, can afflict their squadmates.

Finally, there is a special rule in place for very fast projectiles due to how the game calculates their trajectories:

"For targets closer than 10 meters, the Ice Lance and Lightning Bolt projectiles
will only hit if the player's crosshair was aimed directly at their hitbox upon firing."

The rule doesn't apply for distances above 10 meters, nor for other Spells.

The following table lists all elemental interactions between Spells & Sorceries. Mouseover keywords to read their effects.

All the elemental interactions listed are universal. This means that everyone can combo and interact with the elements the same regardless of who they originated from.